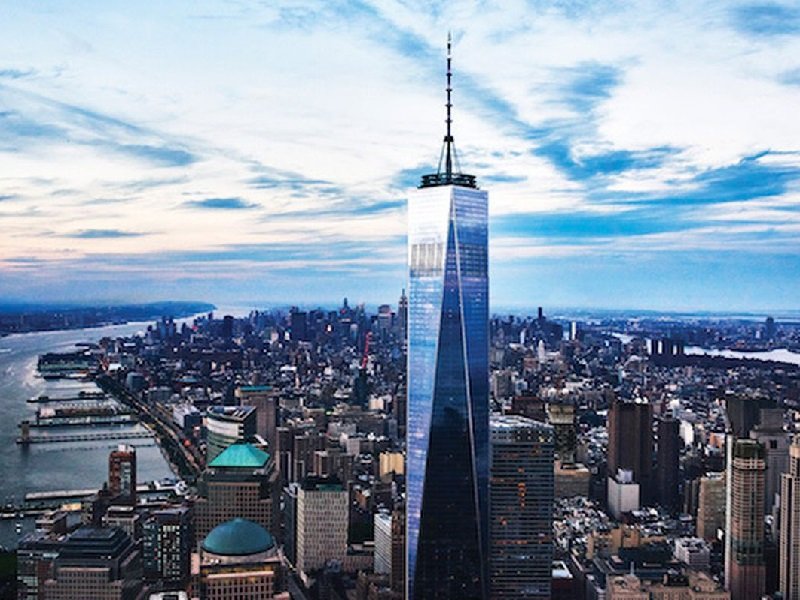 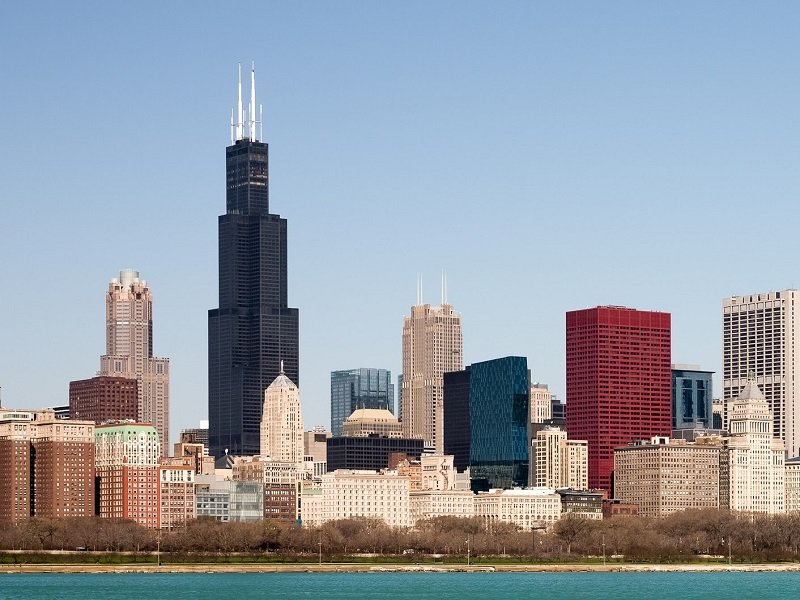 The Willis Tower, built as and still commonly referred to as the Sears Tower, is a 110-story, 1,450-foot (442.1 m) skyscraper in Chicago, Illinois. At completion in 1973, it surpassed the World Trade Center towers in New York to become the tallest building in the world, a title it held for nearly 25 years; it remained the tallest building in the Western Hemisphere until the completion of a new building at the World Trade Center site in 2014. The building is considered a seminal achievement for its designer Fazlur Rahman Khan. The Willis Tower is the second-tallest building in the United States and the Western hemisphere and the 16th-tallest in the world. More than one million people visit its observation deck each year, making it one of Chicago’s most popular tourist destinations. The structure was renamed in 2009 by the Willis Group as part of its lease on a portion of the tower’s space. 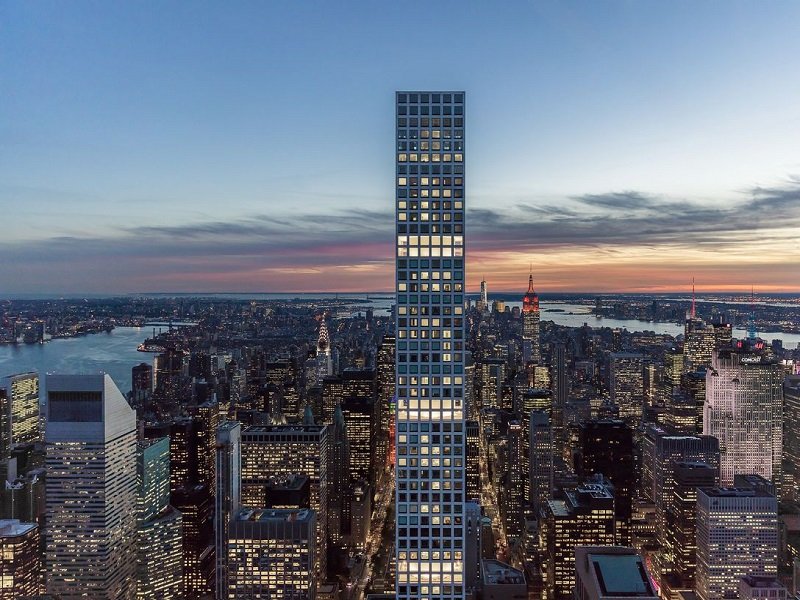 432 Park Avenue is a residential skyscraper in New York City that overlooks Central Park. Originally proposed to be 1,300 feet (396.2 meters) in 2011, the structure topped out at 1,396 ft (425.5 m). It was developed by CIM Group and features 125 condominium apartments. Construction began in 2012 and was completed on December 23, 2015. As completed, 432 Park Avenue is the third-tallest building in the United States and the tallest residential building in the world. It is the second-tallest building in New York City, behind One World Trade Center, and ahead of the Empire State Building. It is also the first, and so far only, building in New York City outside the World Trade Center Complex to be taller than the original twin towers. 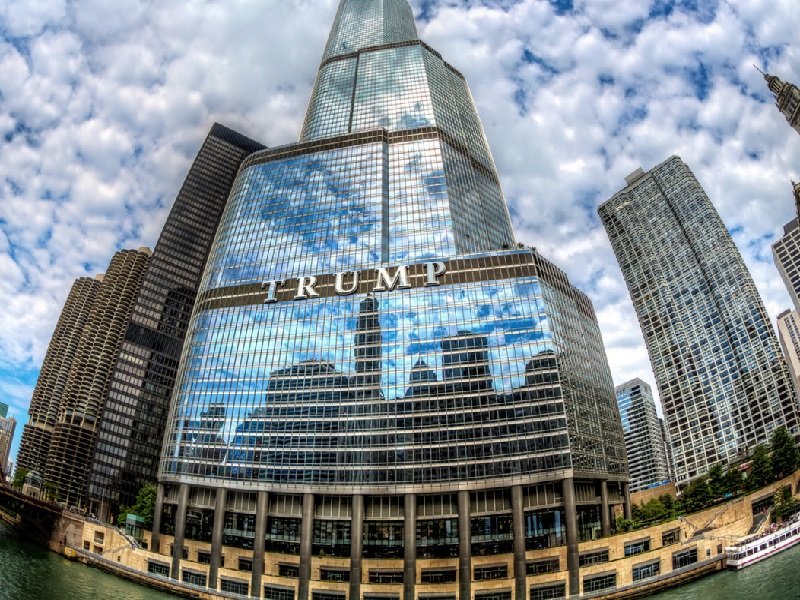 The Trump International Hotel and Tower is a skyscraper condo-hotel in downtown Chicago, Illinois. The building, named after businessman and current U.S. President Donald Trump, was designed by architect Adrian Smith of Skidmore, Owings, and Merrill. Bovis Lend Lease built the 98-story structure, which reaches a height of 1,388 feet (423.2 m) including its spire, its roof topping out at 1,171 feet (357 m). It is next to the main branch of the Chicago River, with a view of the entry to Lake Michigan beyond a series of bridges over the river. The building received publicity when the winner of the first season of The Apprentice reality television show, Bill Rancic, chose to manage the construction of the tower over managing a new Trump National Golf Course and resort in Los Angeles. 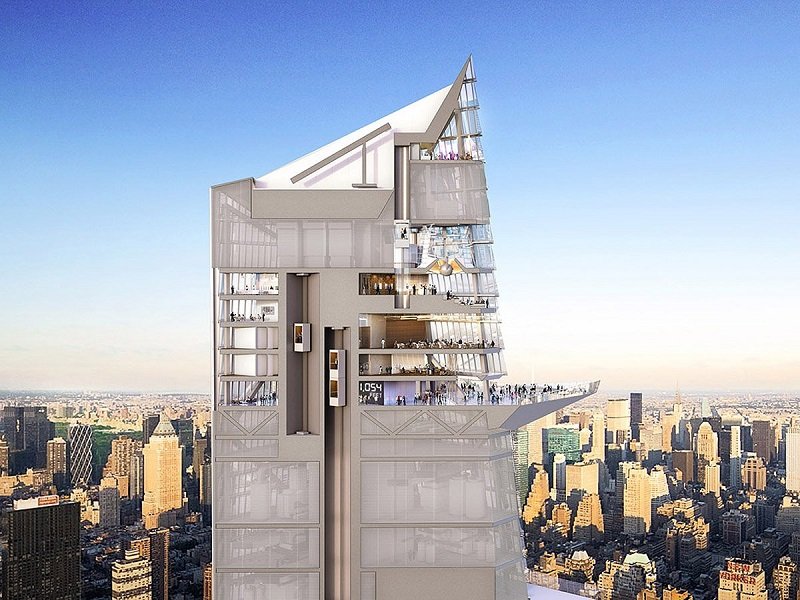 30 Hudson Yards (also the North Tower is a super-tall office building currently under construction in the West Side area of Manhattan. Located near Hell’s Kitchen, Chelsea, and the Penn Station area, the building is a part of the Hudson Yards Redevelopment Project, a plan to redevelop the Metropolitan Transportation Authority’s West Side Yard. As of July 2018, it is the third tallest building in New York City. 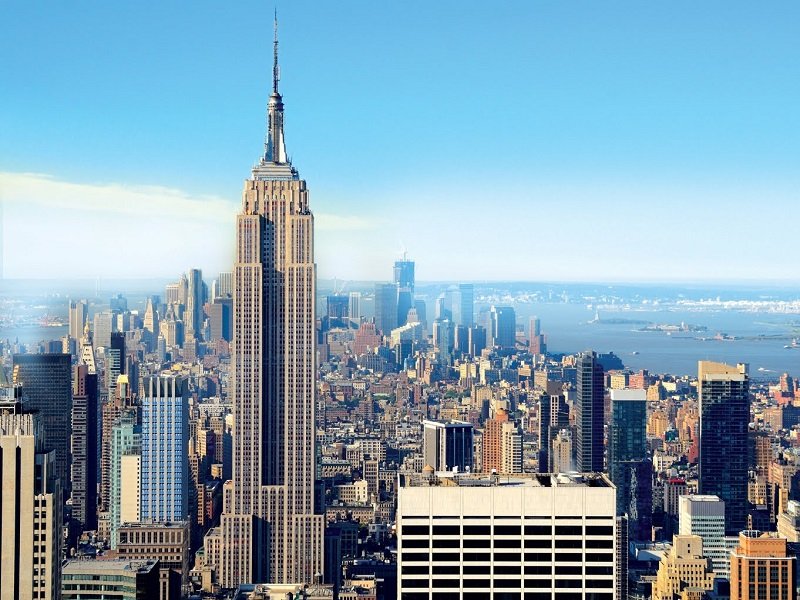 The Empire State Building is a 102-story Art Deco skyscraper in Midtown Manhattan, New York City. Designed by Shreve, Lamb & Harmon and completed in 1931, the building has a roof height of 1,250 feet (380 m) and stands a total of 1,454 feet (443.2 m) tall, including its antenna. Its name is derived from “Empire State”, the nickname of New York. As of 2017, the building is the 5th-tallest completed skyscraper in the United States and the 28th-tallest in the world. It is also the 6th-tallest freestanding structure in the Americas. 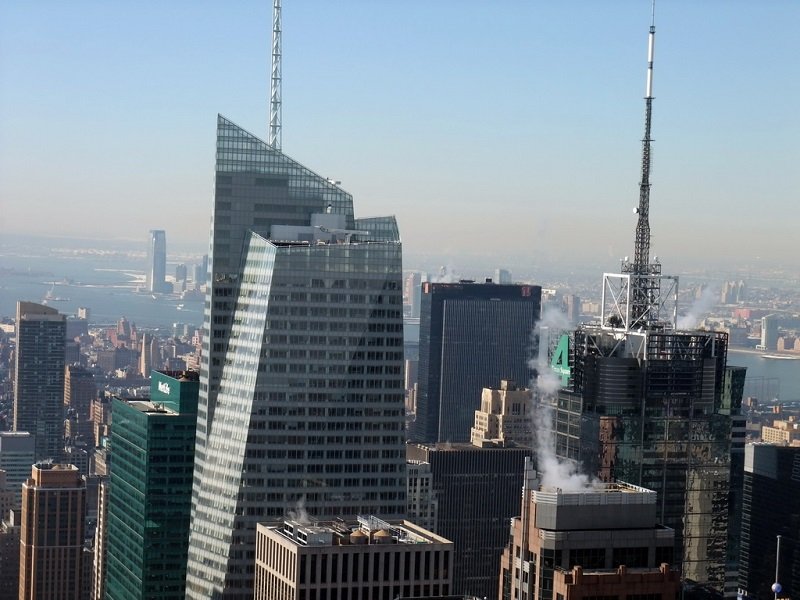 The Bank of America Tower (BOAT) at One Bryant Park is a 1,200 ft (365.8 m) skyscraper in the Midtown area of Manhattan in New York City. It is located on Avenue of the Americas, between 42nd and 43rd Streets, opposite Bryant Park. The US$1 billion project was designed by COOKFOX Architects and advertised to be one of the most efficient and ecologically friendly buildings in the world. It is the fifth tallest building in New York City, after One World Trade Center, 432 Park Avenue, 30 Hudson Yards, and the Empire State Building, and the seventh tallest building in the United States. Construction was completed in 2009. 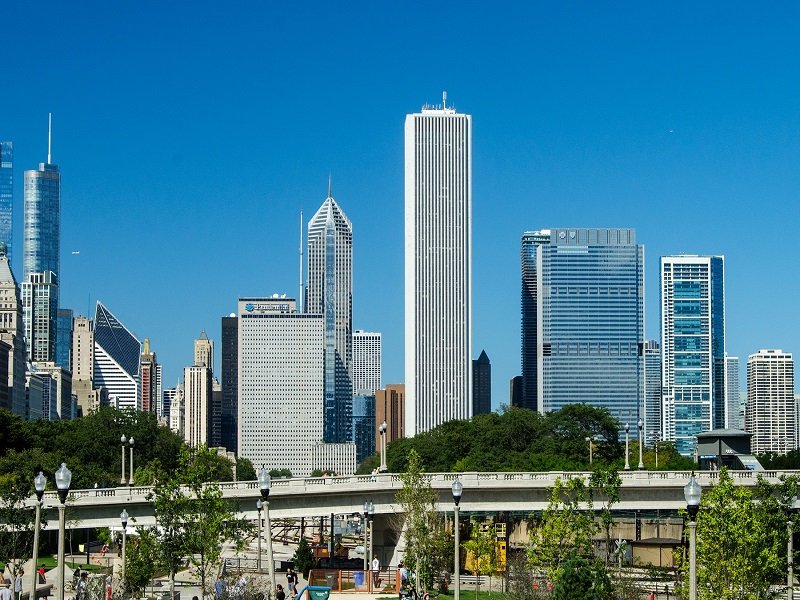 The Aon Center (200 East Randolph Street, formerly Amoco Building) is a modern supertall skyscraper in the Chicago Loop, Chicago, Illinois, the United States, designed by architect firms Edward Durell Stone and The Perkins and Will partnership, and completed in 1974 as the Standard Oil Building. With 83 floors and a height of 1,136 feet (346 m), it is the third tallest building in Chicago, surpassed in height by the Willis Tower, and the Trump International Hotel and Tower. The building is managed by Jones Lang LaSalle, which is also headquartered in the building. Aon Center formerly had the world headquarters of Aon and Amoco. 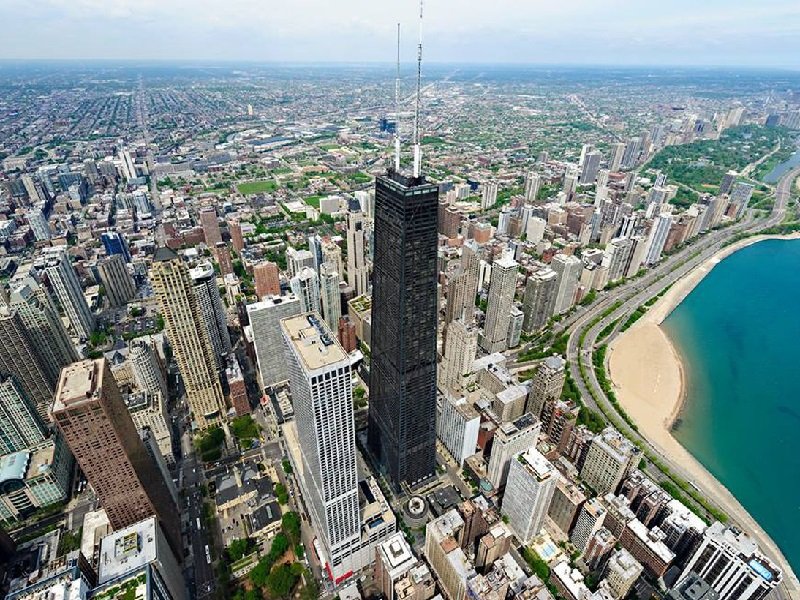 875 North Michigan Avenue, built as and still commonly referred to as the John Hancock Center, is a 100-story, 1,128-foot supertall skyscraper located in Chicago, Illinois. Located in the Magnificent Mile district, the building was known as the John Hancock Center prior to February 12, 2018. It was constructed under the supervision of Skidmore, Owings, and Merrill, with chief designer Bruce Graham and structural engineer Fazlur Khan. When the building topped out on May 6, 1968,[1] it was the second-tallest building in the world and the tallest outside New York City. It is currently the fourth-tallest building in Chicago and the eighth-tallest in the United States 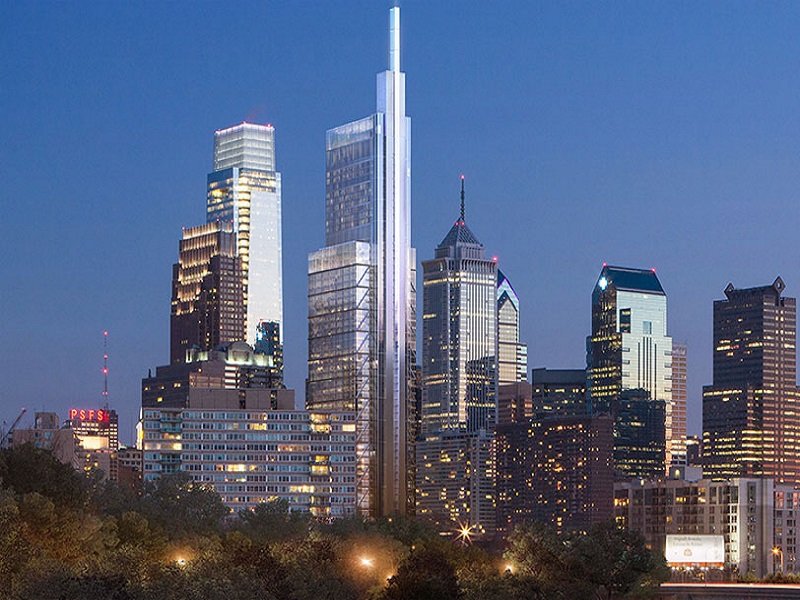 The 60-floor building, with a height of 1,121 feet (342 m), is the ninth-tallest building in the United States and the tallest outside Manhattan and Chicago. The tower is located on the southwest corner of 18th and Arch Streets, one block west of the Comcast Center, the headquarters of Comcast Corporation. A hotel the highest in the country and restaurant will be located on the top floors, while central floors will contain offices for Comcast software developers and engineers, and the lowest floors will have television studios and retail stores.