Top 10 Deadliest Weapons of The U.S Military. The United States military is the most formidable in the world. All four branches are regularly doing research and development into the next generation of military weaponry. Weapons of war have become exponentially more technologically advanced over the last century. It can be mind-boggling to see just how far we’ve come since the days of biplanes and rifles. The most powerful of these weapons will never have to be deployed during an actual conflict. But it can give us a sense of security to know that our armed forces have them at their disposal should the need arise. These are the 10 deadliest weapons that are currently part of the arsenal of the United States military. 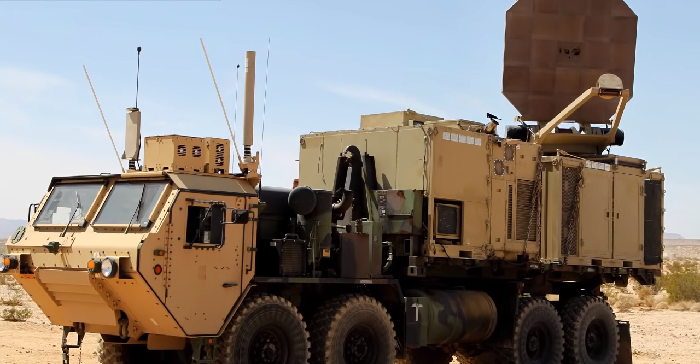 The Active Denial System or ADS is technically a non-lethal weapon. But as with most weapons of this type, it can absolutely be quite deadly if not used properly. The ADS doesn’t fire any projectiles. It’s a directed-energy weapon which might sound like something out of science fiction. But the vehicle-mounted ADS has been in use for a decade. It’s easy to see why it’s earned the sinister nicknames heat ray or pain ray. It works somewhat similarly to a microwave oven which should tell you all you need to know about this weapon’s potential for causing serious damage.

The ADS emits a person-sized beam of millimeter waves a type of electromagnetic radiation. The beam is invisible but if you’re in its path you’ll know it immediately. It produces a strong burning sensation which only gets stronger the longer. His subject is exposed to it stick around long enough and you’ll feel like you’re about to burst into flames. Which makes the ADS pretty effective for crowd dispersal. While the ADS is generally mounted to ground vehicles. A 2011 redesign allowed it to be operated from a moving aircraft and the Navy has also experimented with mounting the units to gunships. 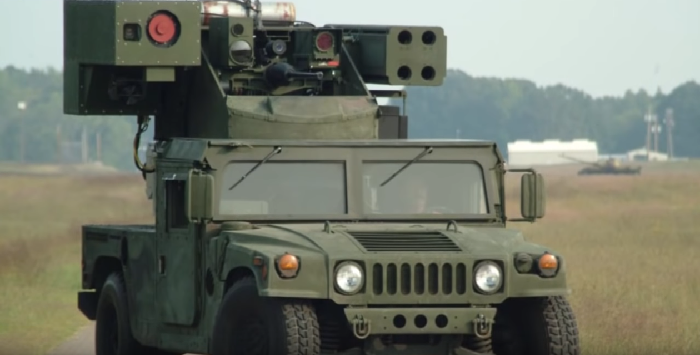 The Avenger defense system is a lightweight extremely portable surface-to-air missile deployment system. It is typically mounted on the backs of combat vehicles. It has a sophisticated infrared targeting system that allows it to find its targets during day or night in any and all weather conditions. They’re usually deployed with Stinger missiles. But in 2008 the Avenger system got an upgrade manufacturer Boeing has long been experimenting with what could accurately be described as a laser cannon. The newest version of the Avenger appropriately dubbed the laser Avenger.

Integrates a directed-energy laser weapon with the Avengers standard kinetic energy based weapons. A real-life laser cannon might seem a little far out but the device is undergone successful testing in 2009. The laser Avenger was able to successfully track three unmanned aerial vehicles during a test and shoot one of them down using only its laser. Obviously, this device is likely to see other applications in the near future. But it’s interesting to know that the military currently possesses actual laser guns capable of tracking and shooting objects out of the sky. And that such weapons are no longer exclusively in the realm of sci-fi. 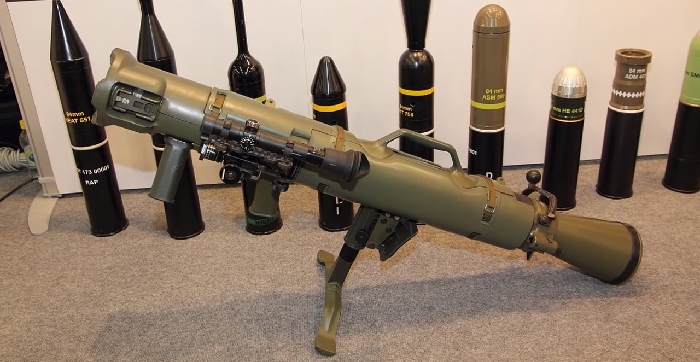 The M3E1 is simply the latest iteration of the Carl Gustav a lightweight anti-armor system. Which was first developed by its namesake inventor in 1946. While it looks like nothing so much as a rocket launcher. It’s actually technically a recoilless rifle, that fires a variety of massive 84-millimeter rounds. Which are expressly designed to penetrate a tank’s armor? The weapon is capable of being operated by just one soldier. But an additional soldier usually tags along to carry ammunition and reload. It’s equipped with both fixed iron and optical sights and can also be used in conjunction with an image intensification system for operation at night. The latest version produced in 2017 is capable of firing a multitude of different rounds and can be equipped with an intelligent targeting system and programmable ammunition. It’s also shorter lighter and more ergonomically designed than earlier models. 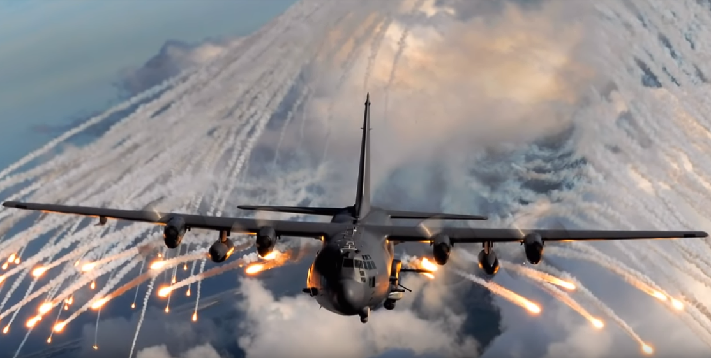 The c-130 cargo plane has long been a staple of the US Armed Forces. But this model was designed for more than just hauling cargo. The Lockheed AC-130 also known by the names of its variants Spectre, Spooky, Stinger 2 and Ghost Rider isn’t going to be flying any solo missions. It’s too big and slow of a target and the fact that it has an unpressurized cabin means that can only fly at a comparatively low altitude. But with proper support, it becomes a nightmare for opposing ground forces. Because this is one big slow target which happens to be armed to the teeth.

The AC-130 doesn’t strafe its targets like many gunships. Instead, it performs a pylon turn during an attack. Essentially moving in a circle over its target while unloading its formidable cache of ammo. The standard model is equipped with one L60 Bofors 40 millimeter cannon and one 105 millimeter M102 howitzer. The spooky model also features 125-millimeter equalizer cannon with an improved firing system and increased ammunition capacity. These gunships have been providing close air support for US operations for over 50 years. They have a sterling combat record having been deployed as far back as the Vietnam War and as recently as the current conflict with ISIS. 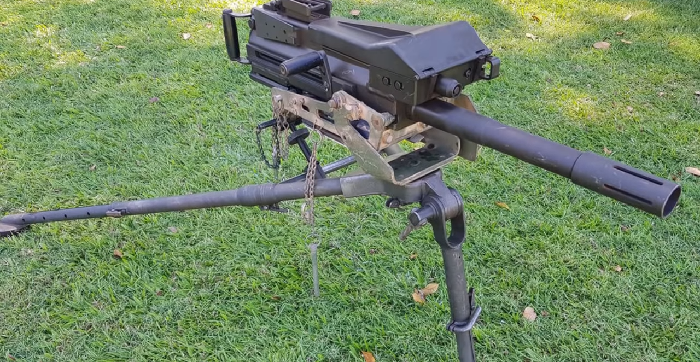 The MK 19 was developed during the Vietnam conflict. But the first design was deemed too unsafe to use in the field. It took significant revisions for the unit to eventually be adopted by the US Army in 1983. But it’s remained in service ever since. The most succinct way to describe the MK 19, picture a machine gun in full operation. Now imagine it’s firing grenades, yes the unit is a belt-fed 40 millimeter fully automatic grenade launcher. Which fires at a rate of up to 60 rounds and again by rounds we mean actual grenades per minute.

It has a ridiculous range of 1,600 to 2400 yards. It can be fired from a vehicle mount or a tripod and is equipped with a flash suppressor not for concealing the unit’s position during nighttime operation but for protecting the eyesight of its operator. It’s an extremely versatile weapon hovering enemy helicopters armored vehicles and enemy bunkers are just a few of the targets, the MK 19 is capable of taking out. Its rounds can pierce 2-inch thick armor and they produce fragments which would kill or wound any personnel within a 15-meter radius of impact. 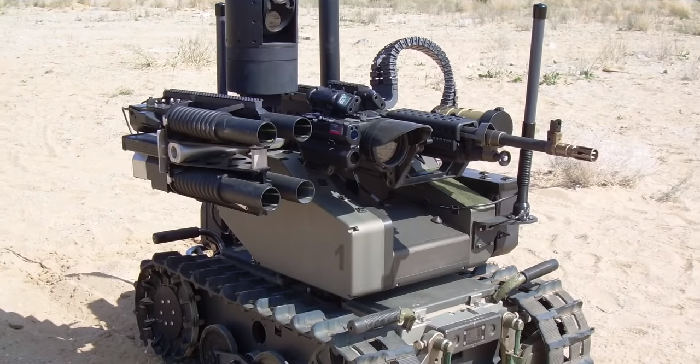 It might look like a mini tank but it’s actually something much scarier. An armed robotic soldier “The Mars or Modular Advanced Armed Robotic System” isn’t fully autonomous. It does require an operator but as the platform was designed primarily for surveillance and reconnaissance. It can handle just about any terrain that a human soldier can. And it packs just as much firepower. Mars is equipped with seven cameras so that it’s operator can monitor potential threats coming from any direction. And of course, they can be switched to the infrared mode for nighttime operations.

The unit has a 360-degree rotating turret outfitted with an M240 beam machine gun. And four grenade launcher tubes, it packs one grenade for each tube along with 450 rounds of ammo. It can cruise along it up to seven miles per hour and can travel up to 1,000 meters from its handler. The unit can be modified for non-combat purposes. These systems can include a loudspeaker, a laser Dazzler, a siren, and a manipulator arm capable of lifting 120 pounds. It’s a truly unique and versatile. 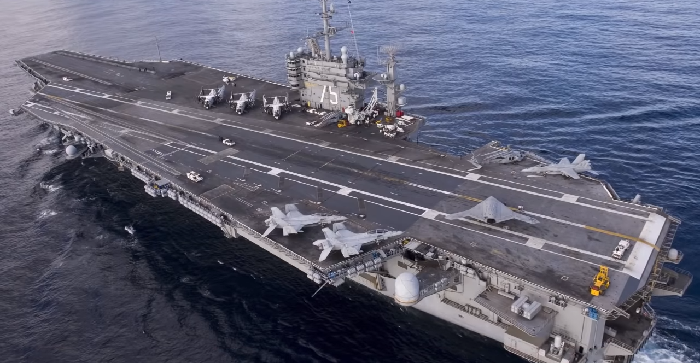 The Nimitz-Class Aircraft Carrier named for world war 2 United States Pacific Fleet Admiral Chester W Nimitz. It has done more to advance the cause of peace than nearly any other weapon of war in history. There are 10 of them active around the world. Each of them powered by twin A4W nuclear reactors, which literally give them unlimited range.

As the name implies the Nimitz-class carriers are capable of delivering up to 70 aircraft any and all of which may be equipped with freefall nuclear weapons anywhere around the globe. The presence of these craft serves as a strong nuclear deterrent. As they are able to deploy a fighting force of nuclear-equipped bombers to locations around the world at a moment’s notice. The Mighty Nimitz class is outclassed by a weapon that is also used in conjunction with a different vessel which can be seen as the pride of the US Navy. 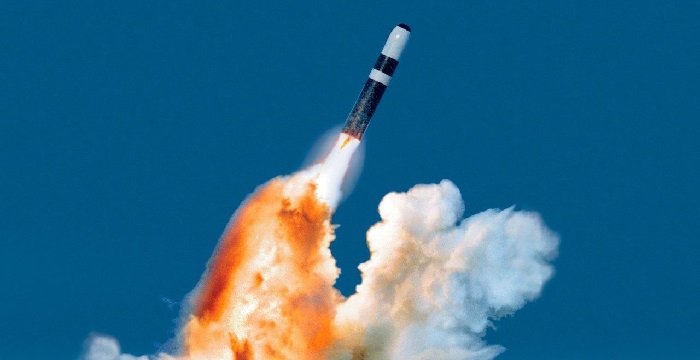 The Trident 2 is simply the most powerful and reliable missile in the Arsenal’s of both the US and UK. It is designed to be launched from a submarine. The Trident is a three-stage rocket with a dazzling range of 4230 nautical miles while carrying a full payload. It’s considered to be an essential component of U.S. nuclear deterrence. As they’re capable of hitting their targets with nearly as high a degree of accuracy as land-based missiles and are every bit as devastating. The Trident has been in service both in the US and UK since 1990, but it’s not a standalone system. 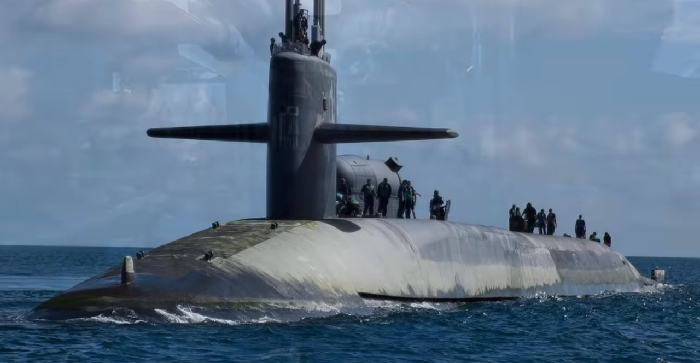 The Ohio-class submarine is the largest ever built for the US military designed to carry out deterrent patrols around the world. Each one has two dozen Trident 2 missiles, each one of those equipped with a dozen multiple independently targetable re-entry vehicles, each of which carries its own warhead. So each Ohio-class submarine has enough nuclear firepower to level an entire country in very little time.

The United States has 18 of them. These boats represent possibly the most important part of the US nuclear triad with the other two being land-based missiles and nuclear bombers. Simply put a first nuclear strike by an enemy against the US stands a decent chance of wiping out a good portion of our missile and bomber arsenal. But Ohio submarines are designed for stealth making them very difficult to locate and track. These subs patrolling the international waters initiating a nuclear strike against the United States. 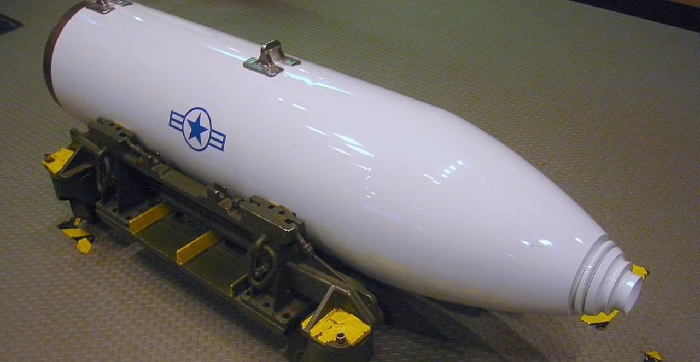 Nuclear weapons are terrifying in anyone who values life on earth which really should be all of us. Sincerely hopes that they will never be used again. Decades of non-proliferation on the part of the US and Russia have severely decreased the number of nukes and service. But of course, those that remain have the power to destroy the entire world dozens of times over. When it comes to sheer destructive power the U.S. carries the biggest stick of any nation on earth, this would be the B83, a nuclear warhead with a downright excessive amount of destructive power.

Designed to be dropped from a bomber the B83 yields an unbelievable 1.2 megatons of explosive energy that is the equivalent of 1 million two hundred thousand tons of TNT. To put this in perspective that’s about 80 times more powerful than the bomb dropped on Hiroshima near the end of World War ll. Making it easily the most powerful freefall weapon in the entire US arsenal.

Have any suggestions for things we missed over the course of the article. Let us know in the comments section we’d love to hear from you.