7 Most Destructive Badass Planes of the U.S Military. There are very few things in the world that can match the awesomeness and mystery of badass planes. These are the symbols of modern Innovation. Let’s look at the top 7 most powerful planes of the American Military. 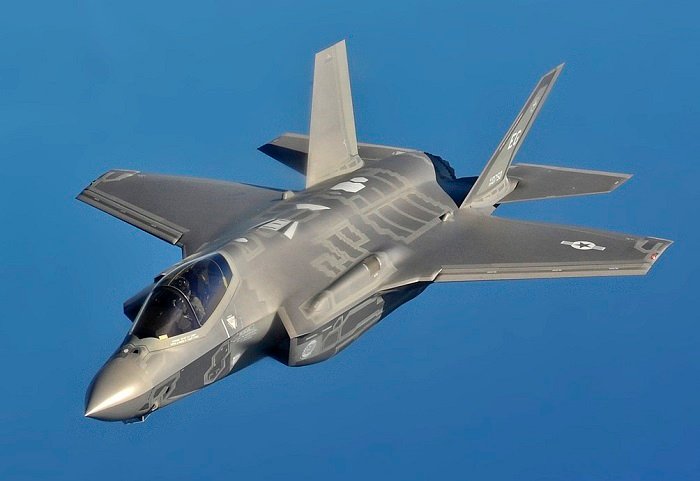 Lockheed Martin F-35 Lightning II Love it or hate it. And there are plenty on both sides. The F-35 is the biggest and most important military aircraft program in the world today. First conceived in The Joint Strike Fighter program in 1992, the F-35 entered service in 2015. Those serious technical problems remain including issues with the stealth coating and night vision cameras.

The F-35 is a multi-role aircraft to replace the Aging fleets of F-16s F-18s A-10 and AV-8Bs. Unlike them, It has the advantage of stealth and advanced sensors. An impressive helmet-mounted display not only replaces the traditional heads up display projected on the canopy to show speed fuel and other data but provides infrared imagery at all angles. So the pilot can see through the aircraft. The F-35 can act as a mobile sensor package spotting targets and handing off data to less capable aircraft around it, boosting their effectiveness. The F-35 successfully conducted its first airstrikes in Iraq bombing. ISIS tunnels is not a true test of modern aircraft though and whether the world’s first trillion-dollar program pays off remains to be seen. 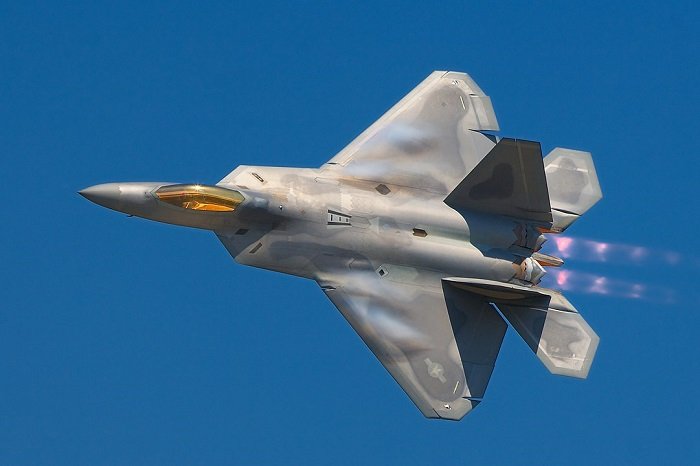 Lockheed Martin F-22 Raptor is the first 5th generation fighter aircraft. The F-22 is a stealthy air superiority aircraft able to cruise at supersonic speeds with a fearsome load of advanced weapons. To many it is still the greatest air-to-air combat vehicle ever devised. The F-22 was the product of the advanced tactical fighter program to replace the F-15 in the 1980s and eventually entered service in 2005.

You may also like: Top 33 Best Patriotic Movies of USA

It was built with two key capabilities in mind. One was super Cruise being able to travel at high speeds for extended periods. Not just in short bursts like the F-15. The other was stealth, the F-22 is all but invisible to radar. So it can spot and engage enemy aircraft long before they ever realize it’s there.

Rising production costs meant that numbers of F-22 were strictly limited and plans to acquire 750 F-22s were soon scaled back and only 187 operational aircraft were built. While there are some concerns over having such a small Elite Fighter Force, nobody doubts the F-22s capability. 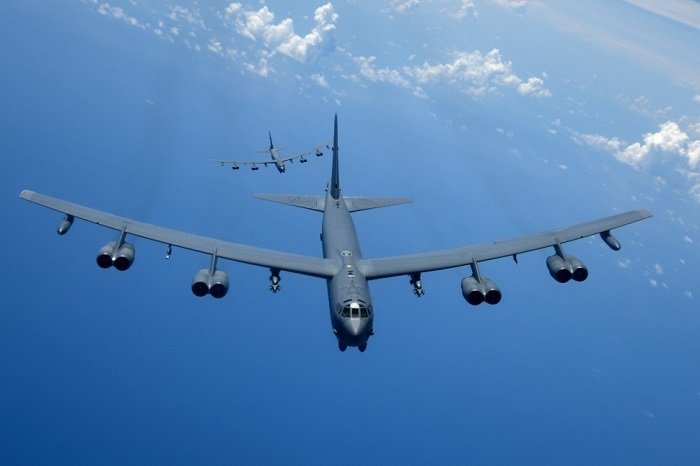 64 years after it entered service the venerable B-52 is the most numerous aircraft in the US air force bomber Fleet. The B-52 is designed in the depths of the Cold War as a nuclear bomber. It had the range to carry Atomic Warheads deep into the heartland of the USSR. Originally intended for high altitude flight.

Modified for low-level operations when flying under the radar became essential. Another shift produced the big belly B-52 for conventional bombing carrying 84 500-pound bombs internally and 24 750 pound bombs on wing pylons. Formations of B-52s wrought havoc in Vietnam with mass raids.

The B-52 has a unique arrangement of eight engines and four pods. All attempts to replace these with four new engines have been rejected and a forthcoming upgrade will retain the eight engine configuration. The B-52 is still going strong with no sign of giving up and some predict that it will keep flying for a hundred years. 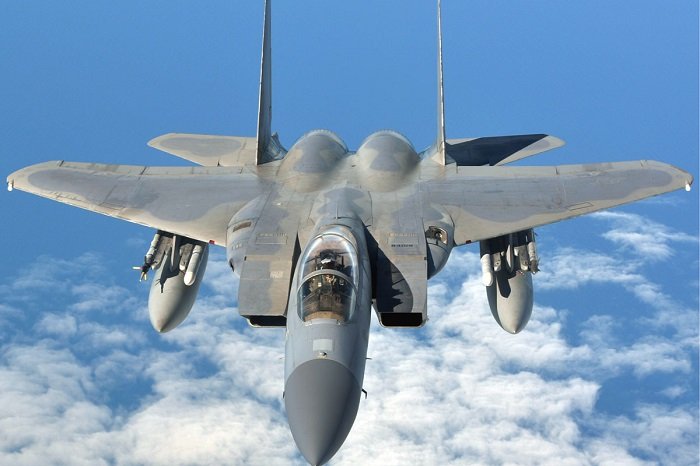 Mcdonnell Douglas F-15 Eagle Introduced in 1976. The F-15 was meant to be an unbeatable air superiority fighter and it delivered. Its record in combat of over a hundred kills with no losses is unrivaled. The twin-engine eagle combines agility with speed reaching Mach 2 .5 at high altitude.

You may also like: Top 6 Best Female Fighter Pilots in the U.S

It’s equally capable of losing long-range Amram missiles Guided by its powerful AN/APG-63 radar or mixing it up in dogfights with short-range sidewinders. The F-15s potential for the ground attack was later exploited in the F-15e Strike Eagle variant. This uses the plane size and power to Halt an impressive load of precision bombs. The basic design is proven so strong that even 40 years on the eagle continues to be effective with the F-15 SE Silent Eagle stealth variant and the F-15 X Advanced Eagle threatening to undercut the advantages of more modern craft 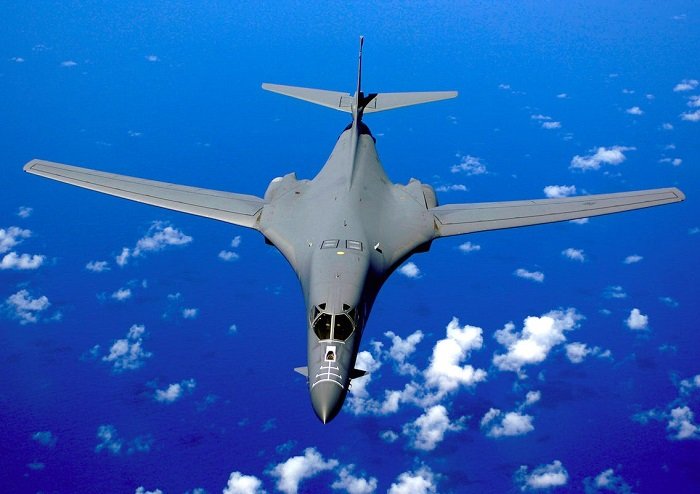 Rockwell B-1 Lancer more commonly known as the bone from B1. The B-1 has battled through a storm of criticism and program cancellations to become a key element of the US Air Force’s strategic bomber force. Conceived in 1970 as a Mach 2 high-altitude nuclear bomber to replace the B-58 Hustler and B-52. The B-1 was canceled in 1977 but resurrected in the 80s due to delays in the more advanced B-2 Spirit. The new version was optimized for low-level under the radar incursions at subsonic speeds.

The B-1 has a combat radius of 3,000 miles without refueling and carries a phenomenal 125,000 pounds of bombs, the most of any bomber. After the start agreement of 1995, the B-1 nuclear capability was removed and it was retest as a purely conventional bomber. Equipped with this sniper targeting pod, the B-1 was able to carry out precision strikes in Iraq and more recently it acted as an aerial cruise missile carrier in strikes against Syria. Now the AGM-158 JASSM long-range anti-ship missile could give the B-1 a new Maritime strike roll, sinking vessels from outside the range of air defenses. 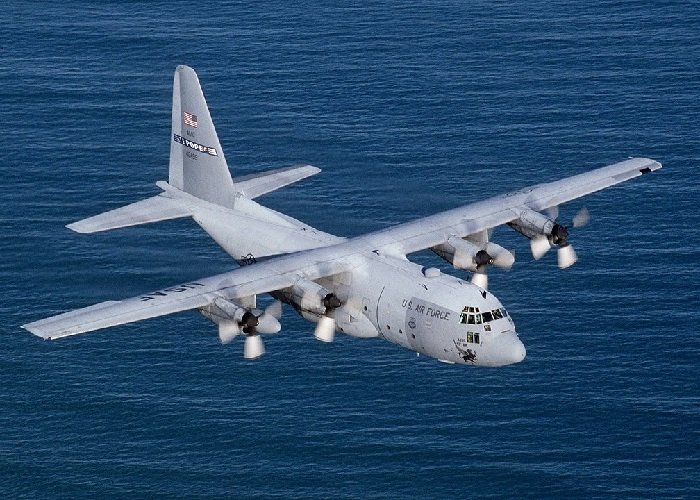 Lockheed C-130 Hercules in service since 1956 the 4 engine C-130 is still the definitive rugged tactical transport. It is operated from unpaved runways in every theater of operation from Vietnam onwards. The AC-130 Gunship version AKA spooky mounts an array of weapons, including a 105-millimeter Howitzer, the biggest gun on any modern aircraft. As well as rapid-firing 40 millimeter and 25-millimeter cannons.

In 2017 the C-130 took on an unlikely new role dropping the outsize Moab Massive Ordnance Air Blast or mother of all bombs, the largest bomb ever used an action on an ISIS tunnel complex in Afghanistan. It may be an old plane, but the C-130 is still full of surprises. 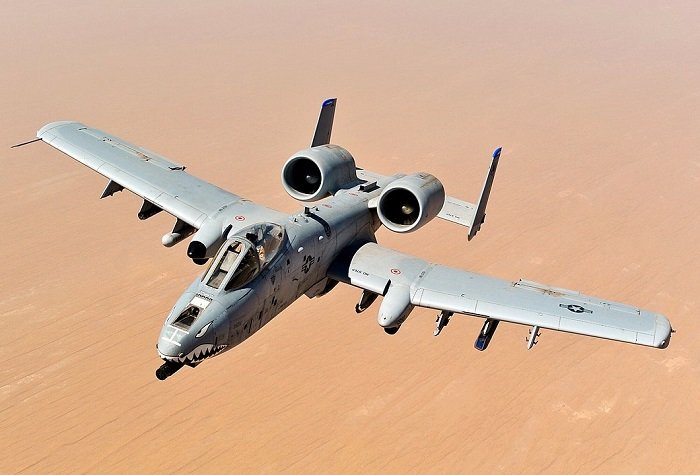 One Fairchild Republic A-10 Thunderbolt II Better known as the warthog for its looks. The A-10 is a slow low-tech aircraft weighed down by armor plate and armed with a giant gun. It looks more steampunk than the 21st century. But the A-10 is a battle-proven veteran that’s won the hearts of the foot soldiers at support. Air Force generals repeatedly tried to retire it. The A-10 was introduced in 1977 as a straightforward tank Buster to prevent massed Soviet armored divisions from overrunning Europe. It would survive by staying low, executing brief pop-up attacks, and with built-in protection including a titanium bathtub that encloses the pilot proof against 23-millimeter anti-aircraft cannon fire for Armament in addition to a respectable bomb load.

You may also like: Top 10 Deadliest Weapons of the U.S Military

The A-10 has the mighty 30 millimeters GAU-8 Avenger, a 7 Barrel Gatling gun firing 70 armor-piercing rounds a second. The cannon takes up one-sixth of the A-10s weight credited with destroying 987 Iraqi tanks in the 1991 Gulf War and doing more damage to Iraqi ground forces than all other Allied aircraft combined. The A-10 has since been upgraded to deliver smart bombs and remains the close support aircraft par excellence.